Did Devin Booker Have The Greatest 3-Point Shootout Performance Ever?

The Trifecta, the gimmick that would become a game changer. Upon its adoption from ABA to NBA, many opposed the introduction of the three-point arc finding it unnecessary and a cheap infringement on the purity of the game of basketball. However, those who diametrically opposed the three pointers would end up on the wrong side of history. The three-point shot has been an exciting addition to the game, the staple of players careers, and a game plan that breeds champions. There’s no greater celebration of the shot beyond the arc and the leagues great sharpshooters than the NBA All-star weekend 3-point contest.

Enter Devin Booker, the 21-year-old Phoenix Sun with a bright future. Mr. 70 added another impressive milestone when he beat out Wayne Ellington (Miami Heat) and Klay Thompson (Golden State Warriors) for the 2018 NBA 3-point champion. In doing so, Booker’s final round performance of 28 points broke the contest record for most points in a single round previously held by the splash bothers Klay Thompson and Stephen Curry. Devin Booker has proven himself the best 3-point contestant of all time except, Not so fast!

In 2013 the competition added a slight format change known as the Moneyball rack. The competition since its inaugural 1986 show has featured 5 racks of 5 ball with the last ball in the set rack being an ABA colored ball that was worth an extra point known as the advantage ball, later dubbed the money ball. However, in 2013 the contest implemented a full rack of money balls placed at the shooters discretion. This rule change has lead to an inflation of points and with it so begs the question is this truly the greatest 3-point contest performance, what would happen if we gave previous competitors a money ball rack of their own, then who then would be the greatest 3-point contest shooter?

Booker’s clutch performance will certainly be tough to beat. Booker made 20 out of 25 shots shooting good enough for an 80% shooting. Booker proves to have two strengths, the first being his consistency. Booker’s money ball rack decision plays little impact to his overall score. The Median, mode, and average of Booker’s score is what he scored 28. Booker’s lowest possible score would be if he’d chosen his third rack at a 26 and if he’d just picked his fourth rack would he have hit a 29 out of the possible 34. Booker also achieved this feat through his second strength, hitting the money. Booker went an 8 for 9 (89%) when shooting the money ball proving that Booker had a knack for hitting the big shot. With little room for error, does anyone challenge Booker’s performance?

Standing at 6 foot nothing, weighing a buck seventy, Price is far from the most physically imposing guys. Still Price had the attributes worthy of his jersey being retired in 1999 as he was remembered as a tough competitor, and more importantly an efficient shooter. Price’s best season had him averaging 19.6 points a night, he became part of the 50-40-90 club for his excellent all-around marksmanship and was a 4-time all-star. Mark Price is overshadowed in most of the history books, playing in Jordan’s era and on LeBron’s team but the man undeniable can shoot.

Mark Price stole the show of the 1994 contest, his victory came after a 24-point performance. Price made 20 out of 25 shots. Price’s shooting percentage was unaffected by shooting the money ball at an 80%. If we were to give a Moneyball rack the average outcome would come out to be 27.2. Price’s perfect 1st and 3rd rack would give him a 40% chance at selection a rack that would tie Booker’s score. However, we’re not 1994 Mark Price so we’ll never know what rack he would have chosen and how this would affect his performance, but Mark’s technique might give us some indicator. Price shoots with a full-blown jump shot. Price and others who relies more on their legs are considered sprinters, as they often lose stamina when reaching the final racks. Price hit 14 of his first 15 shots and ended missing his last three shots. If Price is aware of this, then he’s most likely to place his money rack in the first three options. Limiting it to the early racks Price increases both his averaged improved total score of 27.7 and has a 66.6% probability of picking a rack that would tie Booker’s historic feat.

Jason Kapono was a journeyman, his 6 team stop in his NBA career will most likely be remembered for his impressive 3-point contest performance and his… other impressive 3-point contest performance. Kapono might not have had the most illustrious career but this didn’t mean his bid to participate in the 2007 contest was unearned. Kapono earned his right to compete by having a much-improved season then what was expected from the perennial benchwarmer. Kapono made over 50% (.514) of his three-point shots in his second year in Miami and had a career best 10.9 ppg. Kapono specialized as a three-point sniper and the 3-point contest became the night he’d be remembered for.

Jason Kapono won the shootout by outperforming Dallas Maverick’s legend Dirk Nowitzki and Washington Wizard’s high-volume scorer Gilbert Arenas. Kapono scored a 24 but his chance of tying Booker is slim. Kapono’s 19/25 shooting (76%) was certainly good enough to take the crown but 6 miss shots might not be the “best” performance ever. Only 1 of 5 racks possibilities would have Kapono tie with Booker. Kapono’s average money rack improvement stands at a 26.8, even if we factor in Kapono somehow knowing he’s prone to a slow start, his average only increases to a 27.3. Kapono did hit a 100% of his money ball so argument could be made that he would improve shooting more of the ABA balls.

Kapono now in a Toronto Raptors uniform would come back to defend his title and defend it he did. Kapono not only won back-to-back trophies but improved upon his performance the year before. This time around Kapono would hit 20 out of 25 (80%) and again would hit every single money ball. Kapono gave an identical performance to Booker and shares the 28-average outcome and is more than likely to at the very least match Booker (1/5 chance of 27pts 3/5 chance of 28pts and a 1/5 chance of 29pts). Kapono might not have been the most talented player to grace the contest but he might have had the greatest talent at it. 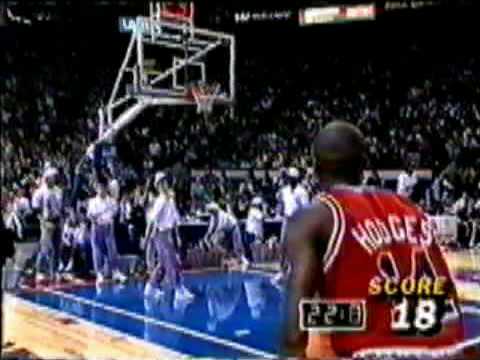 Without a doubt, Craig Hodges has maybe the most insane three-point performances. Hodges victory in 1991 was secured pretty quickly when he started off hitting 19 consecutive shots to start. Cooling off towards the end Hodges goes for 21/25 a solid 84% outing. Kind of scary to think Hodges missed two of his money ball opportunities. If Hodges sets his first three perfect racks as his Moneyball rack, then he would tie Booker at 28. Hodges average rests at 27.4 dragged down by his last rack.

Then comes the greatest mystery of the 3-point contest, Craig Hodges 1986 record performance. 1986 was the inaugural competition, and Hodges is the first of the mentioned shooters to actually lose the contest. The 1st 3-point champion was the legend Larry Bird. Back then the contest was in a three-round format which Bird took full advantage of pacing himself to victor as Hodges faltered in the final round. However, in the first round Hodges gave arguably the best performance and set the bar for every shooter to follow. Hodges went for 25 and his rack for rack total is… unknown.

“one small mystery remains, and it comes from Craig Hodges’ 1986 first-round performance…one of the first attempts in the history of the contest. He scored 25 points in that round, which means he hit a minimum of 20 shots. Unfortunately, we don’t know the maximum because video footage is scattershot and inconclusive” – ShaneRyan24 (Redditor).

So, with lack for a while there was a lack of clarity as to how many shots Hodges made, in Wikipedia he is second in shots made with the asterisk of >20 shots made. The reddit forum might have finally solved the persistent mystery when it produced an excerpt of The Milwaukee Sentinel newspaper from Feb. 10, 1986 that states Hodges finished 20 out of 25. While exact statistics can’t be produced to give Hodges a Moneyball we can assume that similar to Kapono’s 2008 shootout that its very probable to have at the very least tied Booker. If Booker is scored with the same performance under the classic rules, then he only ends up with 24 points.

The game has been changed immensely since incorporating the three-point arc and it’s always a joy to see the league celebrating and honoring the games greatest shooters during the all-star weekend. Excluded from the contenders above was Hubert Davis who in 1998 also scored a 24 but between Kapono and Hodges the likelihood of tying with Booker was well covered. Also, this is strictly limited to just NBA all-star weekend 3-point contest competition, I’ve seen Patrick Sanders score a 29 in a Japan league competition and I would not be surprised if deeper digging brought up more obscure instances. For sake of hoop and ball regulations as well as overall relevancy it makes sense just to compare the NBA performers. Who holds the best 3-point shootout performance? I think that’s for you to decide, Booker has the supposed record, Kapono has a performance that matches Booker, Hodges holds records from most shots made, to consecutive shots, and being right there with them, and with luck on their side Price and Davis deserve to be in the conversation as well. As for who you’d choose, be sure to leave a comment below.

As the great basketball philosopher of our time advised I think I really need to “Stay in my Lane”. K at the MOVIES might have to catch a hint from the blogger Gods and stay away from sports. I had my NFL playoff fun predictions which aren’t so fun when your hours of work gets deleted in an unsaved state of wordpress. This article was originally going to be my first contribution to a new sports site which I collaborated with some friends of mine but things have stalled and sort of fell threw. That said thanks for stopping by and as always… I’ll see you at the movies where apparently where I belong.