Should ‘Wind River’ Have Received an Oscar Nomination? (Review)

“When I go to Indian reservations in the West, and especially to the Pine Ridge Reservation, I sometimes feel unsure where to put my foot when I open the car door. The very ground is different from where I usually stand. There are fewer curbs, fewer sidewalks, and almost no street signs, mailboxes, or leashed dogs” – – Ian Frazier

It is something awe-inspiring to witness a writer whom writes with a pen of the tears of the many, articulating the agony of his gifted sorrow. Taylor Sheridan (Sicario, Hell or High Water) finds the somber setting of a Wyoming Indian Reservation, Wind River to be the breeding ground of misery and a place where he finds a story that needs to be told. Corey Lambert (Jeremy Renner) an expert wildlife tracker stumbles upon a freezing corpse. As reservation sheriff (Graham Greene) teams up with an incoming FBI agent (Elizabeth Olsen) to investigate the body, Corey seeks personal redemption in assisting in anyway possible. Wind River is an enticing mystery that also reflects upon the solemn solidarity that harbors in the snowy mountains.

I don’t know if I completely agree with current model for “female empowerment”, ones that are not only seemingly perfect (Mary-sue) but also make overt remarks that belittles diligent, hardworking secretaries and other noble working-class females as “subservient slaves”. I’m speaking in broad strokes that’s not entirely pointed at a certain movie, and I’m not saying that that type of character shouldn’t exist, but why isn’t there much more admiration for a character like Jane Banner. I felt there was something genuine about this sort of valley girl FBI agent, almost an oxymoron yet never feels unqualified. It’s set up that she’s sort of the “fish out of water” being the outside she has no real comprehension of the weariness and struggle that persists through Wind River. Despite being in over her head, Jane Banner endures exhibiting tremendous: bravery, empathy, and being strong willed. While advocacy for prominent leading roles for females in popular films is important, I don’t know why well-rounded characters who are flawed but are resilient enough to overcome them aren’t as celebrated as much.

Jeremy Renner again proves that he can give a solid leading performance, his character is almost of toned down version of a Casey Affleck performance in that he’s dead inside but he’s not completely dead inside. Wind River is most commendable for it’s perspective of internalized sadness; There are profound moments of visible grief and it never felt unearned as you feel the uneasiness, the unrest of the characters and the setting. It was very nice to see Native American characters with rich personalities, Graham Greene had a couple lines that were funny, and Gil Birmingham is given poignant scenes as his character carries so much weight to him. 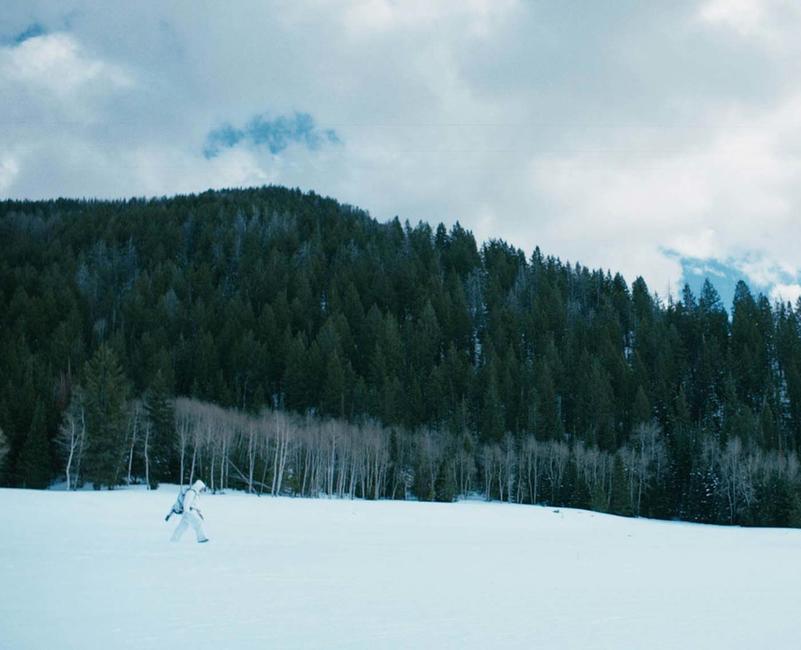 “I remember hearing stories from my mother and father about their parents and grandparents when they were taken off the reservation, taken to the boarding schools, and pretty much taught to be ashamed of who they were as Native Americans. You can feel that impact today.” – Chaske Spencer

Wind River is visually impeccable despite the consistent lack of color. A cinematic marvel such as La La Land showcases how alluring a vibrant color palate is, and The Revenant who has a similar frozen setting still has breathtaking colors of deep blue and greens found in the sky and trees with glowing amber to excite the natural blend of nature. Wind River is defined by greatly desaturated imagery, mostly white terrain with the metal sheet buildings found on the reservation. It matches the tone of the piece, the unglamorized peer into the reservation. Still, with many wides does the beauty of nature shine. While not too stylized, the cinematography gives an intriguing language to the luscious background, and the despair that’s concealed among it.

I had three attorneys dedicated solely to find the statistic of the number of missing Native American women on reservations. Any reservation, not just ‘Wind River.’ They don’t exist. The federal government, which is responsible for the reservations, don’t keep those stats – Taylor Sheridan

Taylor Sheridan is a comforting writer to say the least. Much like his Oscar nominated screenplay for Hell or High Water, Sheridan emphasizes character struggle above all else, and an appreciation for environmental terrain. Both scripts are not easily identifiable in terms of genre but didn’t necessarily feel without classification either. While Hell or High Water would be deemed more of a modern western crime drama, Wind River is a crime drama mystery. Typically, the more words in your drama the more muddled the intentions of the film seems but the fashion in which Sheridan operates seem to make complex ambitions so simple. The film is slightly slow, but the mystery elements and bits of action are more than enough to keep you watching till the end. I won’t spoil anything, but I felt the ending leaves you satisfied and every moment is well appreciated.

Should It have won an Oscar?

The film suffered from some association with the Weinstein company which might have caused this one being sweep under the rug. Honestly, I would argue that the film really lacks a standout element but rather a well-oiled machine with all the gears running smoothly.  I think we shouldn’t let the academy and awards be held as a validation of one’s preferences. I don’t know, ultimately, I just see the Oscars of celebrating hard work and excellence in film-making while it might not always align with my tastes I can enjoy someone of some merit getting their work recognized. I can understand it’s absence from the Oscars, but still I consider Wind River to be a fine film.

I enjoyed Wind River, and I think it’s multi-faceted enough to be appreciated by a wide audience. While the academy may refuse to acknowledge it, I thought I’d recommend it to anyone who stumbles upon this. If you like Hell or High Water, scenic coniferous forest settings, a good mystery, or voyeuristic insight into other communities than Wind River should be a delight for you.